In this post, we walk through a toy problem to talk about the anatomy and design of a statistical test of hypothesis. We will see

Would you believe it if someone told you that 1 out of 10 coin tosses came up as heads? A general approach to decide is to answer “what are the odds?!”.

The simplest ways to do that include making assumptions about how the world works and then computing the likelihood of the observed reality happening in a world like that.

Let’s assume that each coin flip is equally likely to turn out heads or tails, independently of previous coin flips. In other words, the coin is unbiased.

If that is true, then the number of heads in a stream of 10 coin tosses follows a binomial distribution with parameters 10 and 1/2 and we would expect that about half (that is, 5) of the coin flips would turn out heads. Below are the probabilities of observing each possible “heads” count: 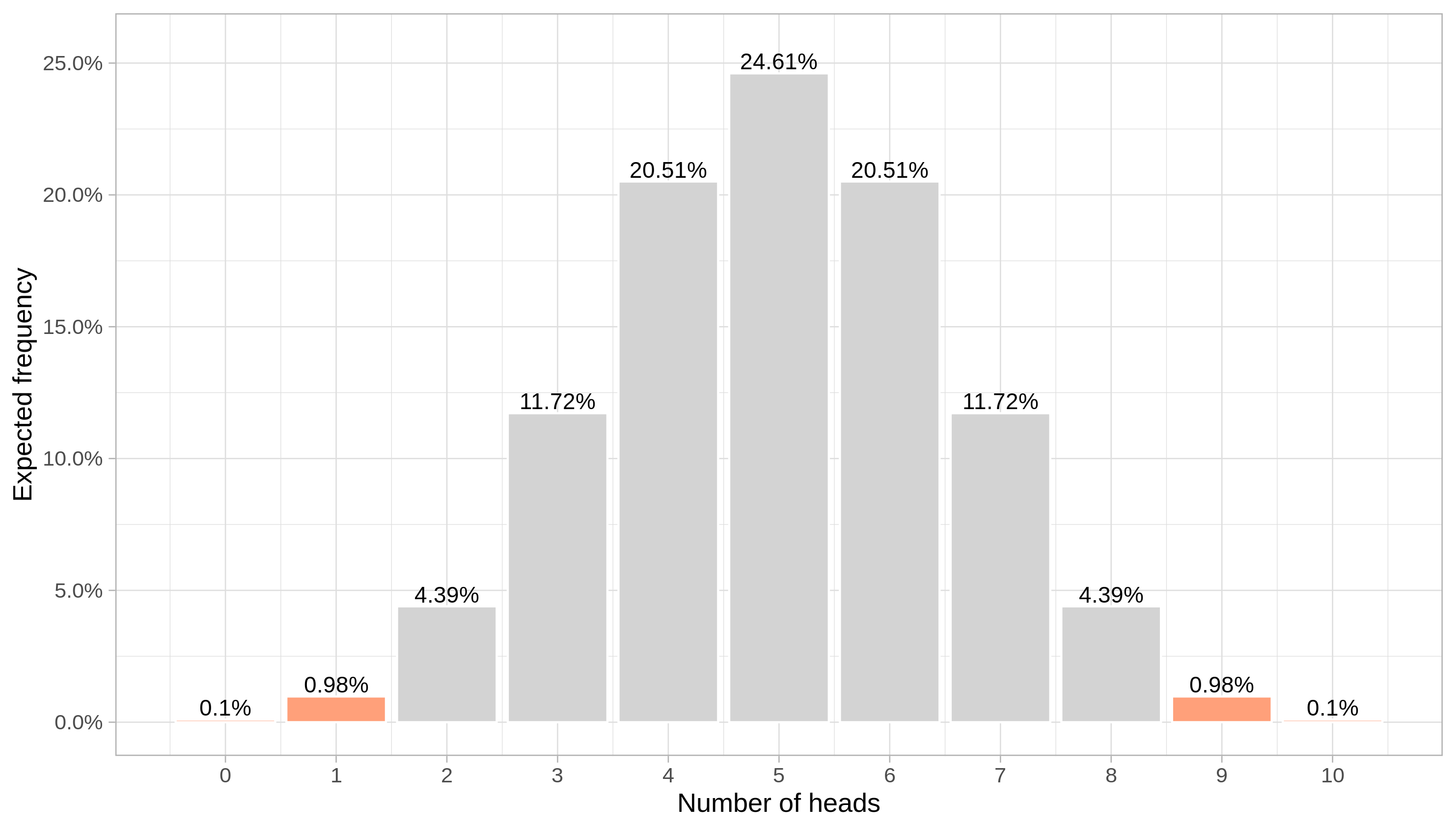 The probability of observing exactly what our friend said (1 head) would be about 0.98%.

More importantly, we can compute the tail probability of events at least as extreme as the 1 count, that is 0, 1, 9 or 10 heads count since they are all at least as far from the expected result 5 as 1. That is, they are at least as likely outcomes as 1. The result is approximately 2.15%.

You can use that number to make a call. Is 2.15% low enough for we to disbelieve that heads and tails are equally likely? Does it make the phrase “1 out of 10 were heads” sound nonsense? The decision is up to you.

You may say a number of valid things, like:

In any case, there is a subset of outcomes for which we would reject the idea that the coin is unbiased.

Well, we have pretty much done it! We have just built a statistical test. It required

The assumptions we make about how the world works (“the coin is unbiased”), upon which we compute the probability of interest, compose what is usually called the null hypothesis. The tail probability (2.15%) is called the p-value.

The function of data that we use to compute the p-value (number of heads) is called the test statistic. It has a distribution under the null hypothesis (binomial, with parameters 10 and 1/2) sometimes called the null distribution. The set of outcomes who would make us doubt the null hypothesis in such a way that we reject it as a plausible description of reality (for instance, “the p-value is smaller than 1%” or “the distance of the heads count to 5 is greater than 2”) is called the critical region.

When making a decision informed by the p-value, we may be wrong in two ways:

The first one is called a False Positive (FP). The second one is a False Negative (FN). The null hypothesis is usually set up as the hypothetical world where

and so on. Therefore, the term “Positive” in “False Positive” refers to the detection of “something”.

Controlling the rates of FPs and FNs is a central task in the design of a statistical test. Those rates pose a trade-off to be solved by the designer:

How sure are you about that uncertainty estimate?

Hypothesis testing is all about decision making. Statistical tests are probabilistic decision-informing machines. Different situations induce different levels of rigor on the required accuracy of p-values.

An important property of a test is its power. The power of a statistical test is the probability of rejecting the null hypothesis given that some alternative hypothesis is actually the truth.

The set of outcomes for which the p-value is less than 5%.

That means we have fixed the FP rate to 5%: we hope being wrong in only 5% of the time when rejecting (the “I see something!!!” part) the null hypothesis. 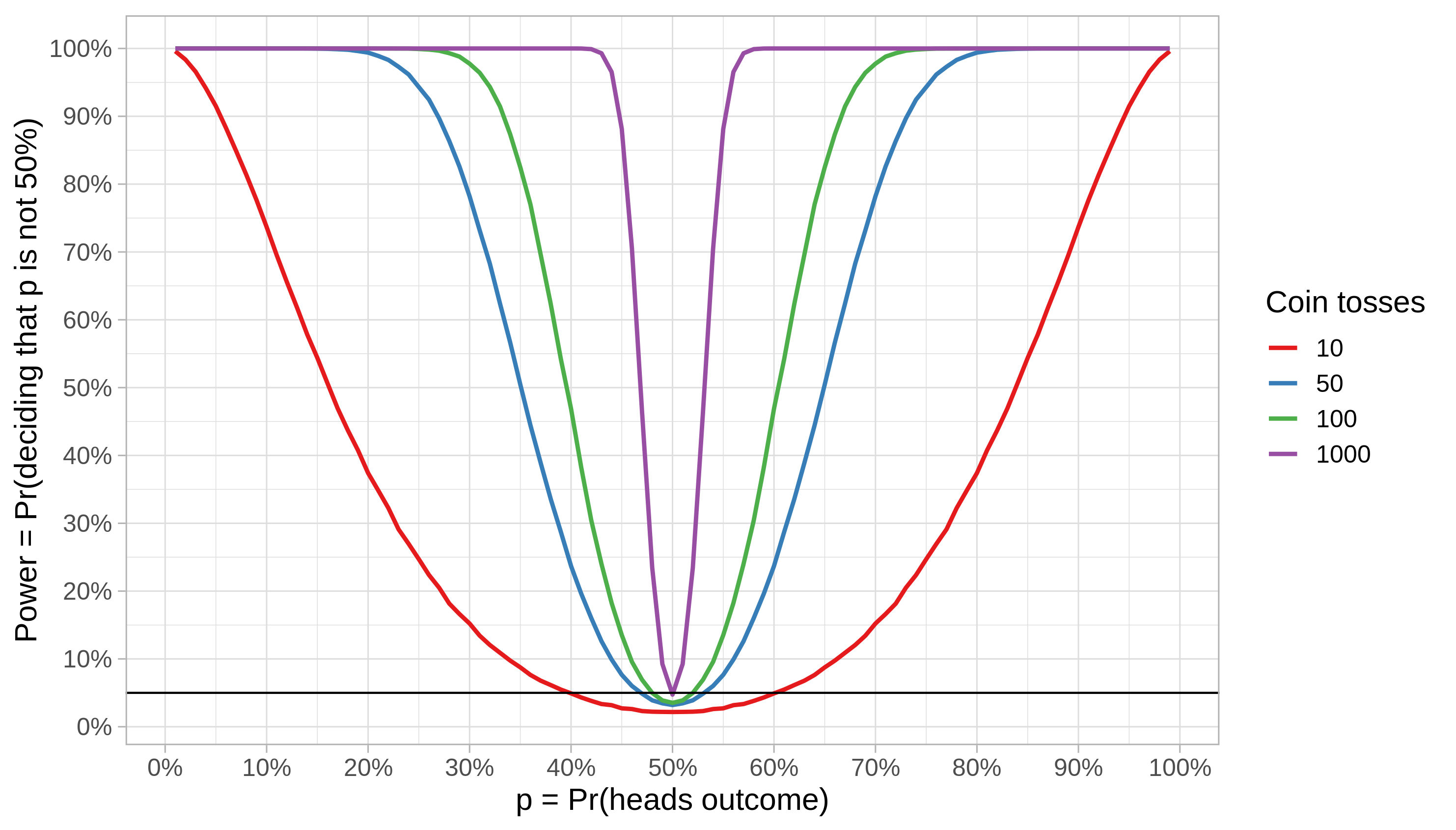 We can draw some conclusions from the power function above:

What is the reason for the conservative bias?

under a discrete distribution is that our actual FP rate can be much smaller than 5%. That means less-than-specified, conservative FP rates.

In our case, the sample size impacts the gap because it is an explicit parameter of the binomial distribution. The gap becomes negligible as the number of coin tosses grows, as we can see below. It remains consistently below 5% after the sample size becomes bigger than 37; that sample size threshold is 624 if we want to guarantee a gap less than 1%.

Can we do something about it?

We saw that by bounding the gap on tail probabilities of a binomial distribution we bound the conservative bias of our test. But, until now, for our case, the only solution is to increase the sample size. What if we can not gather more data? We want a test which always obeys the pre-set FP rate.

We can think about the FP rate as the expected value of a decision function. We’ve been using a function like that without realizing it because it’s trivial:

The (actual) FP rate is the expected value of this function:

Now, it’s easier to see the problem: doesn’t necessarily yield 5% for discrete distributions as it was intended because of the gap problem we’ve discussed. In order to fix that, the idea is to randomize the decision function (w.p. is short for “with probability”):

The constant is just a number chosen so that the actual FP rate, the expectation

equals the pre-specified FP rate, say . Solving it for :

In our case, for 10 coin tosses, the probability of hitting the threshold rule “p-value < 5%” is 2.15%, and it is related to observing 1 or 10 heads. Plugging that in the formula above, we obtain . Therefore, when we think we “saw something” (p-value < 5%), we only decide to reject the null hypothesis in 97.02% of the time. We “flip a coin” with probability to decide. Randomizing a decision may seen odd, but our expectation is that acting consistently according to this new rule, we will have better control over the FP rate.

That is in fact what happens in the long run. Below is the power functions of both tests zoomed in the region around p = 1/2. We see that the actual FP rate now matches the pre-set FP rate in the randomized test, as intended, even for small sample sizes. 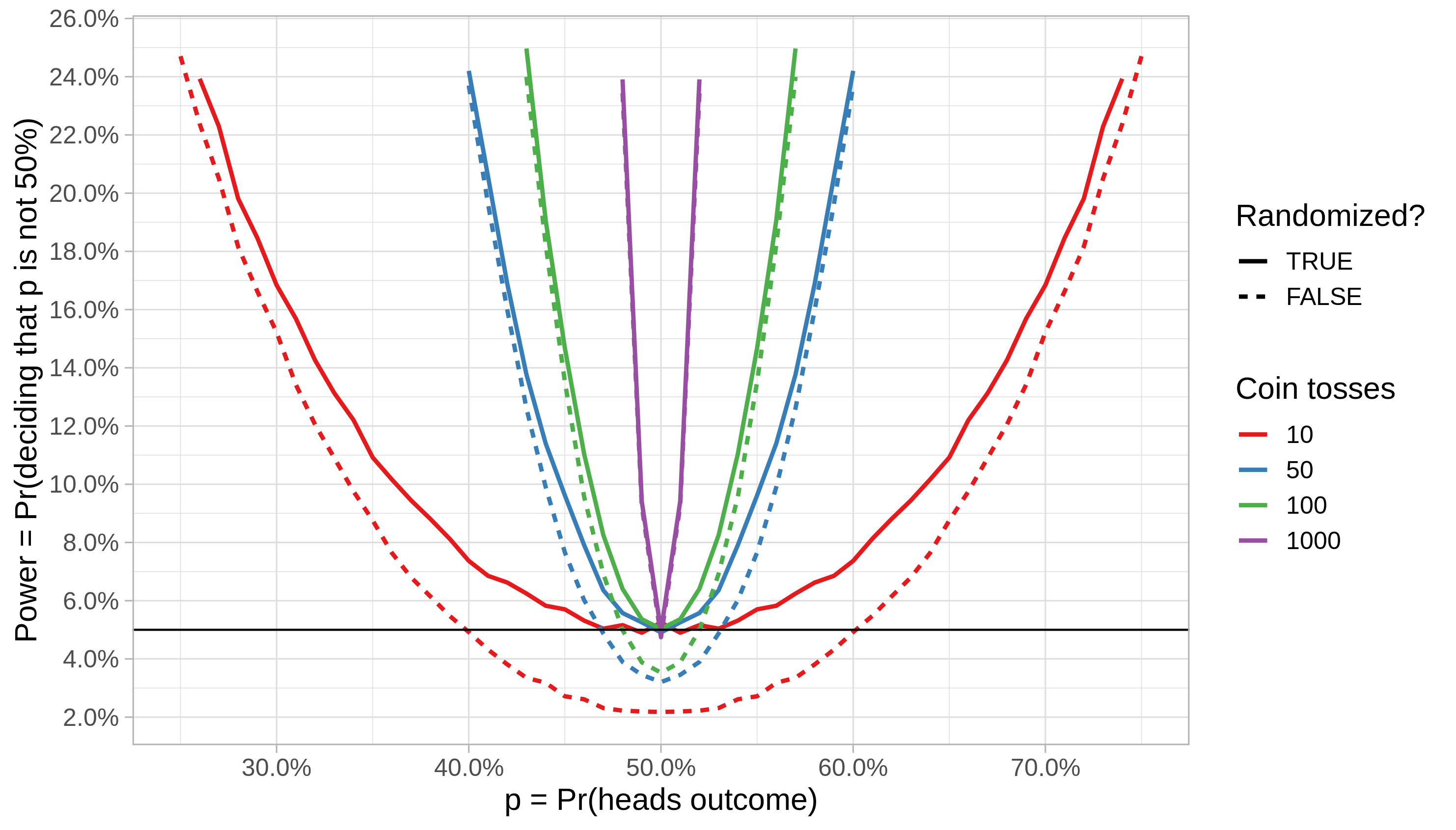 Do you trust it for your life?

Real examples in more important situations are useful to realizing the relationship of the p-value to risk, and the importance of also having reliable estimates of power, besides accurate p-values.

Let’s say you want to do a surgery for changing your appearance. Not having the surgery does not kill you. It is just a “plus”. However, the doctor says that 1% of people die in the surgery table. Would you do it?

That answer can vary a lot amongst different people. The question of whether that 1% represents a reliable estimate of the probability of death for you in particular may be seen as too skeptical in trivial situations but probably we all agree that it’s reasonable here.

What is it for?

In our coin tossing example, we could come up with different models to make sense of the frequency of heads motivated by valid questions such as

Answering that may look silly for coin tossing but similar skepticism is an important fuel to more serious research endeavors. That is a topic worth a post of its own.

Statistical machinery to model reality and then evaluate p-values accordingly can become as complicated as the problem asks for (or as skeptical you are). The rigor is proportional to how critical is to get it right, as with everything in life.

The important thing to have in mind is that

we don’t discover truths using these procedures, we identify lies.